Jonathan Blow: Making Games in 2019 and Beyond

Mark Brown: The Most Innovative Game of 2019

David Stark: Why I Made A Game That Isn’t Fun

Hamish Black: John Wick Hex and the Problems of Adaptation

Razbuten: What Games Are Like For Someone Who Doesn’t Play Games

Doc Burford: i don’t think i like prestige games

Keith Burgun: Why it’s important that we push back on Auto Chess being a “genre”

Adam Millard: Why We’re Wrong About Violence In Games

Mark Brown: Why Does Celeste Feel So Good To Play?

Jim Sterling: The Exploitative Push For Social Networking In Games

Mark Brown: Can We Make Talking as Much Fun as Shooting?

Keith Burgun: Execution in Strategy Games Should Be Considered Randomness

Mark Brown: The Challenge of Cameras

Ross Scott: “Games as a service” is fraud 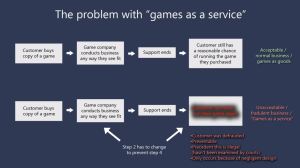 Jim Sterling: A Video About BioWare Working Staff To Tears And Calling Its Mental Abuse “Magic”

Mark Brown: How Games Get Balanced

Andrew Przybylski: When the Fun Stops: The Science of Addiction

Jason Rohrer: 2014 vs. 2018: The Shape of Financial Success Before and After the Indiepocalypse

Mark Brown: Why Synergies are the Secret to Slay the Spire’s Fun